The Rt Hon the Lord Phillips 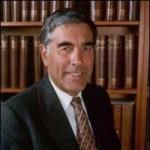 President of the Supreme Court of the United Kingdom since 1st October 2009. Prior to this he was Senior Lord of Appeal in Ordinary. He was Master of the Rolls from 2000 to 2005 and Lord Chief Justice of England and Wales from 2005 until 1 October 2008. He was the first Lord Chief Justice to be head of the English judiciary, when that function was transferred from the Lord Chancellor in April 2006.

Educated at Bryanston School and King's College Cambridge, Lord Phillips was called to the Bar at the Middle Temple in 1962, where he was the Harmsworth Scholar. He undertook pupillage at Essex Court chambers and went into practice specialising in maritime law. In 1973 he was appointed as Junior Counsel to the Ministry of Defence and to the Treasury in maritime and Admiralty matters. In 1978 he became a Queen's Counsel.

In 1982, Lord Phillips was appointed a Recorder and from 1987 was a full-time High Court Judge on the Queen's Bench Division, for which he received a knighthood. He took an interest in legal training, and was Chairman of the Council of Legal Education from 1992 to 1997. He presided over several complex fraud trials including those covering the Robert Maxwell pension fund fraud and Barlow Clowes. In 1995, he became a Lord Justice of Appeal and was appointed to the Privy Council. He was elevated to the House of Lords as Lord Phillips of Worth Matravers in 1998.

In early 1999, he was made a Lord of Appeal in Ordinary and in 2000 succeeded Lord Woolf as Master of the Rolls. He conducted an inquiry into the outbreak of Bovine Spongiform Encephalopathy. He was also chosen Vice-President of the British Maritime Law Association and of the UCD Law Society. He served as Lord Chief Justice of England and Wales from 2005 to 2008, when he was reappointed as a Law Lord. Since 2008, Lord Phillips was the Senior Lord of Appeal in Ordinary until he became the first President of the Supreme Court of the United Kingdom in October 2009.