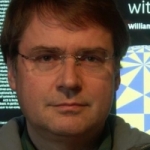 Professor of Financial Mathematics within the Mathematics Department at the King's College London, William Shaw received his doctorate in mathematics from the University of Oxford, following which he held post-doctoral positions at the University of Cambridge and M.I.T. He then worked as a consultant applied and financial mathematician before joining the Quantitative Analysis Group of Nomura International plc, where he was a specialist in computational finance and equity derivatives modelling. At the same time he held a post as College Lecturer at Balliol College, Oxford. He was later Fellow and Tutor in Applied Mathematics at St. Catherine's College, Oxford, while also University Lecturer in Mathematical Finance and Academic Director of the Oxford Diploma and MSc in Mathematical Finance.

Professor Shaw directs the KCL Centre for Financial Grid Computing, which is a member of the Apple Research and Technology Support (ARTS) programme. His research interests include: Fat-tailed distributions and their financial origins; The theory of quantiles for Monte Carlo simulation; Applications of complex analysis to finance and applied mathematics; Performance indicators for stock selection, including robust and genetic approaches; Optimization; Convertible bonds; Computational finance, especially symbolic methods. From time to time he also works on fluid mechanics, applied electromagnetics, complex variables and twistor models of string theory. He has written 3 books on applications of computer algebra, including "Modelling Financial Derivatives with Mathematica". He is a Fellow of the Institute of Mathematics and its Applications and is co-editor in chief of Applied Mathematical Finance. He is also an Associate Editor of the International Journal of Theoretical and Applied Finance and a member of the Scientific Committee for the Knowledge Transfer Network in Industrial Mathematics.