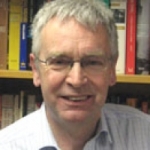 Adrian Thomas was born in Cornwall and went to school in Manchester, Barry, Newbury and Bath. He studied at Nottingham University, University College, Cardiff, and the Academy of Music in Kraków. Among his teachers were Denis Arnold, David Barker, Basil Deane, Ivor Keys, Ida M. Prins-Buttle, Bogusław Schaeffer, John Sykes and Arnold Whittall. Adrian Thomas has since led an unusually varied life in university teaching, research and broadcasting as well as being a composer and conductor.

He is the author of several books on Polish music and a wide range of concert programme notes and CD booklets. He has given pre-concert talks, research papers, public lectures, seminars, workshops and broadcasts across Europe, North America and in Australia.

His first appointment was as a Lecturer in Music at The Queen’s University of Belfast, where he subsequently became Senior Lecturer in 1982. He was the youngest UK Professor of Music when he was appointed to the Hamilton Harty Chair at Queen’s in 1985.

In 1975 he set up a small electronic studio at Queen’s with a couple of VCS3 synthesizers (right) and a reel-to-reel Revox. The studio was expanded in the 1990s by Michael Alcorn and by 2001 it had developed to become the internationally renowned Sonic Arts Research Centre.

Adrian Thomas has also had the good fortune to work outside the UK university system. In the 1980s he spent a year at the University of California at San Diego and held several composition fellowships at the MacDowell Colony in New Hampshire and at VCCA in Virginia. His music has been broadcast by BBC Radio 3, including a commission for the BBC Singers, Black Rainbow (1989). Adrian Thomas’s long association with the BBC began in 1976, as a contributor to Radio 3’s Music Magazine. This was followed by five years as presenter of Radio Ulster’s weekend arts programme. In the late 1980s he chaired the BBC’s Central Music Advisory Committee in London and was a member of the BBC’s General Advisory Council. In 1990, he was appointed Head of Music at BBC Radio 3 in London, on secondment from Queen’s University. He had overall editorial responsibility at Radio 3 for music and for speech output on music, including BBC orchestral programmes and outside broadcasts. On his initiative, Radio 3 organised Polska! (November-December 1993), a UK-wide festival of concerts, plays and speech programmes. It ranged across Polish arts and culture, celebrating in particular the 80th birthday of Lutosławski and the 60th birthdays of Penderecki and Górecki.

After returning to Belfast in 1994, Adrian Thomas moved in 1996 to become Professor of Music at Cardiff University. In 2003-06, he also held the 400-year-old Chair of Music at Gresham College, London, subsequently becoming Emeritus Professor. Cardiff University also conferred the title of Emeritus Professor on him when he retired in 2010. He now lives again in Cornwall, where he continues to write and take daily walks across the moors.