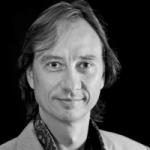 Stuart Clark is a widely read astronomy journalist. His career is devoted to presenting the complex world of astronomy to the general public. Stuart holds a first class honours degree and a PhD in astrophysics. He is a Fellow of the Royal Astronomical Society and a former Vice Chair of the Association of British Science Writers. On 9 August 2000, UK daily newspaper The Independent placed him alongside Stephen Hawking and the Astronomer Royal, Professor Sir Martin Rees, as one of the ‘stars’ of British astrophysics teaching.

Currently he divides most of his time between writing books and writing for the European Space Agency in his capacity as senior editor for space science. In addition, he writes articles and news for New Scientist, The Times, BBC Focus and BBC Sky at Night and is a former editor of Astronomy Now magazine. In July 2010 Quercus published Stuart’s book, The Big Questions: The Universe. US, Dutch and German editions will follow. In it he poses the 20 biggest questions in cosmology and brings the reader up to date with the latest thinking about each topic.

The latest book is a large, highly illustrated one with plenty of ‘wow’ and is in UK chain Waterstones now for Christmas, published by Callisto. It is called Voyager: 101 Wonders between Earth and the Edge of the Cosmos. Foreign details will be available soon.

For a year or two now, he has also been writing a trilogy of historical fiction based on the key turning points in astronomy. Called The Copernicum Trilogy, it will be published by Birlinn starting in spring 2011. The first title in this major work is The Sky’s Dark Labyrinth and dramatises the turbulent lives of Galileo and Kepler. The second will be the story of Isaac Newton and his contemporaries and the third will be about Albert Einstein’s era. These books are to be translated around the world.

Until 2001, Stuart was the Director of Public Astronomy Education at the University of Hertfordshire. There he taught undergraduates, postgraduates and the general public, whilst researching star formation, planetary habitability and the origins of life. In a paper published by Science in 1998, he helped develop the current paradigm that the left-handed amino acids necessary for the origin of life on Earth were synthesized in star-forming regions spread throughout the Galaxy.

In 2001, Stuart decided to increase his part-time writing to a full-time occupation. He remains a Visiting Fellow promoting the University and contributing to observatory open nights. Having crossed from mainstream science into science journalism, he now spends his working life translating astronomy, space research and physics into comprehensible language for the general public.

Stuart’s recently published books include Galaxy, a companion volume to Deep Space, both from Quercus. They are huge picture books that take the reader from the furthest reaches of space and time to the beauty of the nearby celestial objects. Upon publication Deep Space was chosen by UK supermarket giant, Sainsbury, as their non-fiction book of the month.

The Sun Kings, another of his books, is also for the general reader. This book recounts the true story of a phenomenally powerful solar explosion that hit the Earth in 1859 and paints the picture of the Victorians who witnessed the awesome event. The Sun Kings was shortlisted by the Royal Society for their 2008 general science book prize and has been translated into Italian, Greek, Chinese, and for the Brazilian market, Portuguese.

Thirteen other books written by Stuart Clark have been published to date, selling more than 250,000 worldwide and three of which he subsequently updated for second editions. Universe in Focus: The Story of the Hubble Telescope (Barnes and Noble, 1997) sold more than 100,000 copies. One of his children’s books, Journey to the Stars (Oxford University Press, 2000), has sold more than 50,000 copies and was OUP’s lead title for the 2001 Bologna Book Fair. These books have been translated into eight languages so far – German, French, Spanish, Portuguese, Polish, Czech, Swedish and Danish. Stuart has made contributions to six other published books.

Stuart has written articles for amongst others: The Times, The Guardian, The Economist, The Times Higher Education Supplement, Daily Express, Astronomy Now and Sky and Telescope. He co-wrote the script for a DVD about the Hubble telescope and contributed to as well as performing in a National Geographic programme Storm Worlds. His other numerous television and radio contributions include Radio 4’s Material World, Radio 3’s The Essay, BBC’s Tomorrow’s World and Nine O’clock News, and Channel 4’s Big Breakfast. Promoting The Sun Kings and Storm Worlds he has been interviewed on radio stations around the globe. He has made individual podcasts and a series of 12 based on The Big Questions: The Universe. Stuart has been the accompanying astronomer on a cruise ship and on an eclipse tour to China. He frequently lectures to the public up and down the UK and, increasingly, across the world.