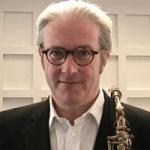 John Harle is one of the most exciting contemporary musicians in Britain. As the leading saxophonist of his generation he has a world profile, both in the wealth of music his playing has inspired and in his own compositions.

His performance of Harrison Birtwistle's Saxophone Concerto Panic at the Last Night of the Proms in 1995 propelled him onto an international stage - followed in 1996 by Terror and Magnificence, his Top Ten hit album on the Decca/Argo label, in collaboration with singer/songwriter Elvis Costello.

His opera, Angel Magick, was commissioned by the BBC Proms in 1998. The librettist, David Pountney directed the production and the composer conducted the cast of eight singers, his own band, and the viol consort Fretwork.

As a concert soloist his repertoire consists of the sixteen concerti written especially for him, as well as twenty-four further works for orchestra. His recital programmes (usually with the pianist/composer Richard Rodney Bennett) are drawn from some of the thirty-one chamber works dedicated to John and an immensely varied range of music from John Dowland through to Chick Corea and his own compositions.

John Harle is the composer of over 25 concert works and 40 film and television scores. The Stanley Myers/John Harle score to Prick Up Your Ears received Best Artistic Achievement in a Feature Film at the Cannes Film Festival 1988. John has since been nominated for many awards including the Mercury Music Prize and the 1996 Royal Television Society Awards' Best Original Music (for Defence of the Realm). The theme music to the BBC drama Silent Witness was awarded a Royal Television Society Award in 1998.

In 1989 John was appointed Professor of Saxophone and Chamber Music at the Guildhall School of Music and Drama in London and has been the mentor to a new generation of saxophonists.

As performer, composer and producer his discography numbers some thirty-five recordings on labels including Decca, Argo, EMI Classics, Sony, Hyperion, BMG, Virgin and A&M. A CD of his own music Silencium was released on the Argo label in 1997. He recently produced Lesley Garrett's new album for BMG, I will wait for you and composed the music to the 16 part BBC Television series A History of Britain.

Music by John Harle is published by Chester Music