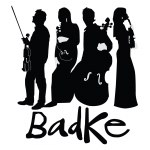 The Badke Quartet, celebrating its 10th anniversary this year, is widely recognised as one of Britain’s finest string quartets. Winners of the 1st prize and audience prize at the 5th Melbourne International Chamber Music Competition in 2007, the Badke Quartet has received widespread acclaim for its energetic and vibrant performances.

The Quartet has worked with some of the world’s greatest string quartets and studied with Gabor Takács-Nagy at IMS Prussia Cove and members of the Alban Berg Quartet in Cologne. From 2005 to 2009 the Quartet held the Senior Leverhulme Chamber Music Fellowship at the Royal Academy of Music.

The Badke Quartet regularly performs at concert halls and festivals in the UK and abroad, including the Aldeburgh, Aix-en-Provence and Verbier Festivals, West Cork Chamber Music Festival, London’s Wigmore Hall, Kings Place, and the Musikverein in Vienna.

No strangers to the airwaves, the Badke Quartet has frequently broadcast live on BBC Radio 3 as well as on Classic FM, Lyric FM (Ireland), ABC Classic FM (Australia) and for the European Broadcasting Union.

Last season saw the Quartet perform all over the UK and Ireland, premiere two new works written specially for the Quartet at Kings Place in London and further afield played in Norway, Spain, Germany, Sweden and made its début at the Concertgebouw in Amsterdam.

Believing strongly in the importance of education work, in building new audiences and making chamber music much more accessible, the Quartet performs in schools across the UK, bringing chamber music to hundreds of children in conjunction with the Cavatina Chamber Music Trust.

The Quartet play on a fine set of instruments. Charlotte performs on a 1684 Andrea Guarneri, which the Stradivari Trust is helping to raise the funds needed to secure the violin for her use; Emma plays on a a Nicolò Amati violin from 1672, kindly on loan from a private donor; Jon plays a Marino Capicchioni viola and Jonathan is performing on an fine Italian cello from Venice c.1730 also facilitated by the Stradivari Trust.